After purchasing and comparing a good number of portable power systems, the 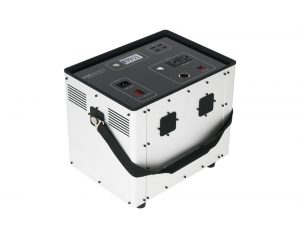 Humless Sentinel (now called) the Humless Go Mini) is the one I look to as my first line backup and emergency power source.

Here are some of the key benefits as to why the Humless Go Mini should be considered over other portable “solar generator” type battery power packs.

The main “plus” is what’s at the heart of the Go Mini, the Lithium Iron Phosphate (LiFePo4) battery. The battery in any portable powerpack is the weakest component of the system, which is why the battery technology and chemistry chosen by Humless is so important. The LiFePO4 lithium battery has multiple superior characteristics over the typical lead acid batteries and even other lithium-ion batteries used in most other portable power pack systems. Read more about the LiFePo batteries (by clicking here).

The DC to AC power inverter the Go Mini uses is a another plus.The inverter is the electronic “engine” that takes the stored power in the battery and converts it to the power compatible for use in our homes. The Humless Go Mini uses a pure sine wave inverter which means the power it converts and make is close to identical to what is provided from your home’s wall outlet. Other powerpacks use inverters that only approximate the electric power with what is called a “modified sine wave”. The pure sine wave electric power made by the Go Mini will work better with all appliances/devices and especially motors that need the “cleanest” power available to function without an issue. Just try and plug a laser printer into a power pack with a modified/square wave inverter and see what happens.

The Go Mini’s battery is able to be charged from quite a few renewable power sources from solar power, a hand crank dynamo generator, and also from the AC power wall outlet in your home. The Go Mini is quite compact and portable at only 35 pounds. It can be taken and used anywhere due to it’s light weight and small size. It’s case is a full metal box which makes it very durable. The input and outputs are electronically protected against overloads and will automatically reset without the need to replace a fuse. Read more about the Go Mini’s info.

With solar panels added the Go Mini is a great fuelless solar generator for surviving long term power outages being powered and recharged by the sun. For those of us who have ever experienced a day or more without power, we know how essential a backup power source is… or would have been if we would have been smart enough to have one available beforehand. Consider all the things that we do on a daily basis that only require a small amount of electricity to accomplish, but would take quite a bit of time if we didn’t have access to power.

Having the Go Mini’s as a backup power source is imperative for emergency preparedness. Just think about it. You have a refrigerator or freezer but it’s slowly warming up and the food is about to spoil. You’ve got a lamp for light, but how are you going to power it? You have a TV or radio for communication but can’t plug them in to anything with power to check the news. There are many thing that we take for granted but will rapidly come to our attention when the lights go out. This is why we need to take a step forward now and prepare for the things we really need before they are unavailable. Power is one of those essential needs.

I’ve built portable solar and battery backup systems using various parts and components over the last ten years and I must say I much prefer the size, weight and compact package of the Go Mini compared to most of those I’ve built. This Go Mini power system provides the ability to run a kitchen appliances, grain mills, bread mixer, tools, lights, radios and other basic devices enough to handle the basics needs for an emergency or even longer term power outages. It will even power fridges or freezers for short periods of time when needed. The Humless Go Mini is a great system and I would recommend it to anyone.

Here’s a great price for a Humless Go Mini Solar Generator system with solar panels and all at: www.GetPreparedStuff.com