First off, what is an inverter? An inverter is a device that converts DC or Direct Current power (the type of electricity stored in batteries) into AC or Alternating Current power (the type of power we use at home). With an inverter, the power stored in a 12 volt battery such as the kind used in a car/truck/RV or a battery power pack can then be used to run devices and appliances that would normally only operate while plugged into a wall outlet in your home or business.  With a battery and inverter combination such as the Humless Go Mini you have the ability to operate tools and other equipment away from a wall outlet.

There also different types of inverters available on the market and that’s why the pure sine wave needs to be explained. Depending on how an inverter converts power from DC to AC the resulting electricity can vary between a simple and rough or stair stepped ‘square’ wave on one end, to a finer and smoother sine wave on the other which is what the electricity in your home/business is like.  These two wave forms also differentiate the main two types of inverters on the market today – the ‘true’ or pure sine wave inverter and the ‘square’ modified sine wave.

The less expensive ‘square’ sine wave inverter generates a simpler square wave form because it is easier and cheaper to switch the output on and off, or in other words, changing the alternating current’s “negative” and “positive” leads continuously. If you add special filters, this simple on and off switching can be altered to a series of stair stepped voltages. The resulting electric wave form is a stepped or pixelated looking semi-sine wave, which approximates a pure electric analog sine wave but isn’t quite the same. These resulting waves are what we call ‘modified’ sine waves, because the corners are curved, but they still remain quite ‘square’ in actuality. In contrast, the output of a ‘true’ sine wave inverter is close to exactly the same as the AC power we get in our houses.  It is more difficult to produce this kind of AC power from an inverter, but it allows you to safely and more efficiently power all of your electronic devices with it. 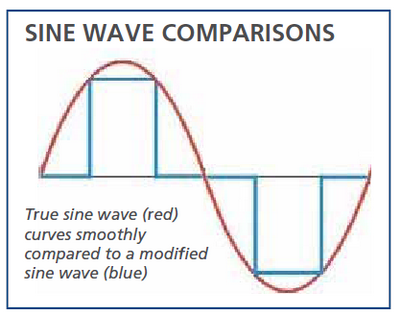 The ‘square’ or modified electric waves will work and power some equipment and appliances, however you should be careful with your more expensive or sensitive devices or equipment because some rely on the smooth analog sine wave to function properly and without undue noise or heat. This is because a modified sine wave produce both too much harmonic distortion and noise in comparison to a pure sine wave inverter. With some devices, especially inductive motors running off of a ‘square’ or modified sine wave inverter they can easily use 20% more power than they would running off a pure sine wave inverter and will generate more heat in the process which can lead to an early failure of the equipment.

You can buy a Humless Go Mini with a Pure Sine Inverter at: www.GetPreparedStuff.com