Why is having a lithium iron phosphate battery that important? LiFePo4 batteries (LiFe or LFP for short), unlike a lead acid battery, do not have problems with sulfation which can quickly reduce the capacity and life of any lead acid chemistry type batteries. Lithium batteries are able to remain semi-discharged for long periods of time without ill effects while leaving a lead acid battery sitting unused without a maintenance/trickle charger attached to it will cause minor degradation in capacity in as little as 2-4 months or unrecoverable degradation in 8-10 months of not being charged.

A LiFe battery is very resilient in this area and has a much lower self discharge rate of only 2-3% per month with practically no long term effects from being kept in a partially discharged state, it’s actually recommended to store a LiFe battery at a 40-50% state of charge. A lead acid battery on the other hand self discharges much more rapidly and declines in performance accordingly. Leaving a lead acid battery on the shelf without a trickle charge can result in a dead or flat battery when you need it most. The Humless Go Mini system also has an auto shutoff feature that will turn itself off to prevent the battery drawing down unexpectedly, allowing the battery to remain in storage for up to 1 year or more and still have power remaining when it is turned on.

An example of a LiFePo4 raw battery system configuration: 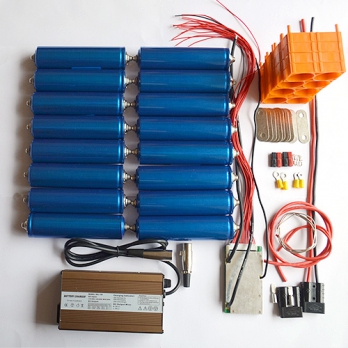 One of the biggest reasons that a LiFe battery generates more watt hours is because the nominal voltage is a little higher than that of a lead acid battery but it is still very much compatible with all 12v devices. An LFP battery also has a much flatter discharge curve and less voltage sag. HAM radio operators love these batteries because they keep a higher voltage over the full discharge range of the battery especially while they are transmitting which means more power to communicate for longer periods of time between recharges.

A LiFe battery weighs much less than a lead acid battery. At 35 pounds, the Humless Go Mini system has more power capacity than a 65 pound Xantrex 1500 powerpack system which uses an array of lead acid batteries totaling 50AH. At almost half the weight, with twice the usable power, in a smaller lighter weight unit, and a battery that should outlast a lead acid battery cycle wise by two to four times, that’s simply amazing!

A great attribute of the LiFe battery is that it can be charged and discharged a lot faster than lead acid batteries. The Go Mini system can be recharged in 2.5-3 hours using its built in 20A AC battery charger or be recharged in 3-5 hours with a two 130 watt solar panels. With solar power in particular, the charge characteristics of a LiFe battery allows much more power to be absorbed in the same amount of sun than a lead acid battery. A lead acid battery can take as much time to charge the last 15% of the battery to 100% full as it did to charge the first 85%, and if you don’t top off the last 15% you will loose battery capacity over time. A 50AH lead acid battery could take 10-12 hours to fully charge in the same conditions as the LiFePo4 battery can do in half that time.

In a prolonged power outage situation where you are using your power pack for essential power needs you really need to get as much power into the battery as quickly as possible. If you are charging the Go Mini by generator or by car you don’t want to run them any longer than needed to get the battery fully charged. If you are using solar power you have to take into account that the sun isn’t always shining on your solar panels at full intensity because of clouds and weather conditions blocking the power producing rays of the sun. In over cast conditions the power generated by your solar panel could be a small fraction of what it produces in full sun and you need every bit of power generated by your solar panels to be stored as efficiently as possible. LiFePo batteries take a charge quicker and more efficiently than lead acid cells.

If a lead acid battery isn’t fully charged and topped off during general cycling it will after a few weeks start to loose some of it’s capacity due to the sulfation process mentioned earlier. A lead acid battery needs to be fully charged (topped off) at least every three weeks in order to reverse any build up occurring on it’s lead plates due to sulfation. If that full charge doesn’t take place the batteries capacity will start to degrade and performance will decrease. Consider that in conditions such as a power outage where a constant need for power is required it will be very hard to let a power pack system based on a lead acid battery sit long enough to fully charge. The solution is simple; a LiFePo battery doesn’t have the problem of it’s capacity diminishing if it’s not fully charged. In fact it could actually help make it cycle more times and last longer. A solar generator with a lithium iron phosphate battery inside will charge faster, last longer, cause you less maintenance headaches and store better than any other power pack available. It is certainly worth the price of it’s lithium battery, and then some!

You can buy a Humless Go Mini which runs on a LiFePo4 battery at: www.GetPreparedStuff.com

2 thoughts on “Why Choose a LiFePo4 Battery?”